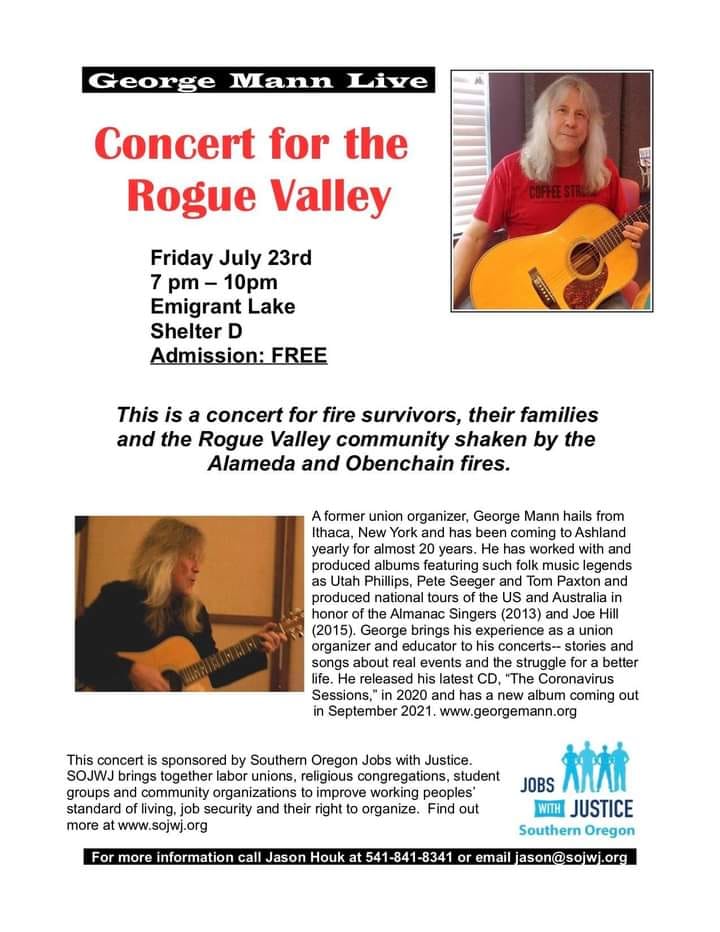 Join us for an outdoor concert at the pavilion honoring the survivors and all those who have helped in the wake of the great fire that swept away around 2500 homes last year. This is a concert for fire survivors, their families and the Rogue Valley community shaken by the Alameda and Obenchain fires. With Covid restrictions lessening it will be one terrific time for people to come out, gather, commiserate while listening to a folk music concert.

Folks will gather on Friday, July 23rd at 7:00 PM at Emigrant Lake in the covered space at Shelter D. There will be entertained by folk and labor singer George Mann.

A former union organizer, George Mann hails from Ithaca, New York and has been coming to Ashland yearly for almost 20 years. He has worked with and produced albums featuring such folk music legends as Utah Phillips, Pete Seeger and Tom Paxton and produced national tours of the US and Australia in honor of the Almanac Singers (2013) and Joe Hill (2015). George brings his experience as a union organizer and educator to his concerts– stories and songs about real events and the struggle for a better life. He released his latest CD, “The Coronavirus Sessions,” in 2020 and has a new album coming out in September 2021. www.georgemann.org

This concert is sponsored by Southern Oregon Jobs with Justice. SOJWJ brings together labor unions, religious congregations, student groups and community organizations to improve working peoples’ standard of living, job security and their right to organize. Find out more at sojwj.org